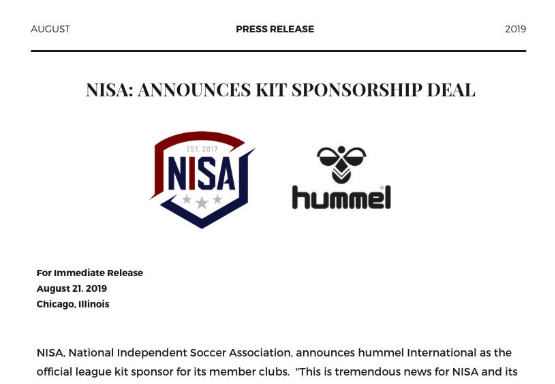 On Wednesday, August 21, the National Independent Soccer Association announced the first major sponsorship agreement for the young league. Anytime there is an announcement of this magnitude there are always questions. One of the most frequently asked questions was: “Isn’t NISA supposed to be independent?”

Of course, Tim Kelly, Chairman of Chattanooga FC, put it best when he responded to one such fan by tweeting the following:

With his brief 218 character response, Kelly was able to hit on a critical point: the American sport fan’s lense is built upon a closed system framework.

Hummel is a great partner and believes in what NISA is building but to provide some clarity on NISA’s first major sponsorship agreement, let’s begin by discussing what the Hummel agreement is not:

Now let’s talk about what the Hummel agreement does accomplish.

Second, it was a high priority for NISA’s front office to identify a standard ball, which would be used league-wide. By providing a league-wide ball partner, clubs can save money on ball purchases. Additionally, the league can provide a standard level product and ensure consistency for all matches. The Hummel agreement accomplishes these objectives. It is a win-win for the clubs financially and the integrity of the competition.

So, why are these kinds of agreements important in an independent and open system?

One of the first steps for groups and clubs in the expansion process is to consider what the club’s income statement is going to look like. What are the revenue streams? What are the expenses? A number of questions around economic viability, which there should be. While the NISA expansion team works very closely with these groups and clubs on the financial projections for a new club, the less unknowns the better. Providing an inquiring group with a way to secure a kit manufacturer in a favorable agreement from day one provides the group with several benefits:

Another perk of a league-wide opt-in agreement is that it allows clubs to negotiate from a position of strength should they seek out a better deal. An opt-in arrangement not only gives the club multiple options, but it also enables the club the option of waiting for the right agreement. Even if a NISA club chooses to not opt-in to a league wide sponsorship deal, the mere presence of the deal as a quality alternative should assist front offices in securing better deals for their clubs.

Imagine a future in which a club that joins NISA immediately has access to hundreds of thousands, or even millions of dollars via opt-in sponsorship agreements and shared revenue streams. These revenues just make sustainability that much closer to reality for every club.  Ultimately, each of these agreements elevate the floor for new clubs. With each agreement that is put into place, clubs joining NISA are that much closer to a sustainable existence. We are obviously a way from that point, but we must start somewhere. The Hummel agreement is just the first step toward making the vision a reality.