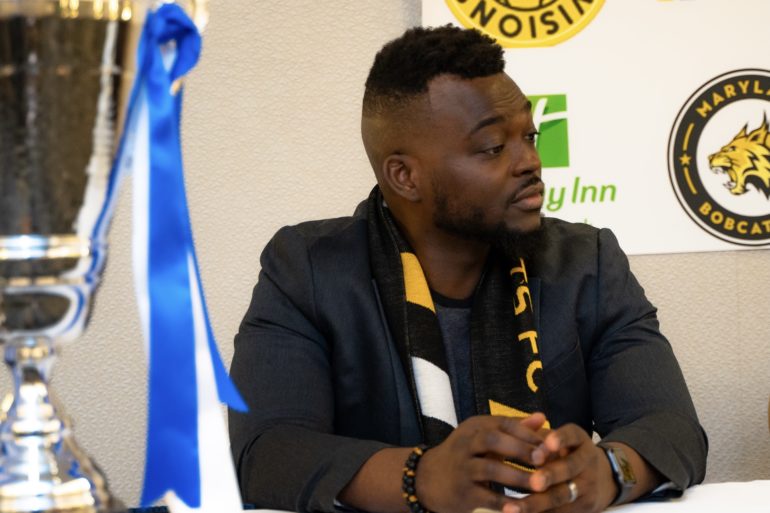 Babajide Saba is the president of the Maryland Bobcats Football Club. He also is a member of a growing number of front office executives who have taken non-traditional paths. He is a man forged by his experiences; a man who has grown to allow his unique past to inform not just his own future, but the futures of every life he has the power to affect.

It’s easy to see his accolades (United Premier Soccer League National Championship, undefeated season and NISA Independent Cup regional champions in 2020 alone) and get a sense of the skill he brings when it comes to the pitch.

This, however, would only tell you a fraction of the story. The first thing you should know about Babajide Saba: it’s only after the final whistle cuts through the air that his real work begins.

At 35 years old, Saba – known affectionately to those around him as “Jide,” or simply “Jay” – is acutely aware of his place in the world, as both a Nigerian immigrant and a man of color. The very nature of his existence has presented myriad roadblocks in his career – an unfortunate fact of being a minority in spaces ruled by the majority.

“You’re judged and looked at differently,” Saba remarks. “I’ve been given less opportunity. I’ve been overlooked and passed up.

Growing up in Nigeria, football is all he knew, he says.

“There is not a Nigerian child that doesn’t play,” Saba recalls. “[I] went for multiple tryouts, and in most of them I was overlooked. Other people were chosen even though I was better.”

Saba knows this is a sentiment all too common to the experience of minorities the world over. It’s a state of affairs that presents a strange dichotomy, as it’s at odds with the way he (and much of the world) views the sport of soccer – an international language with the ability to bring all together.

During his tenure as president, Saba has made it one of his major objectives to advance the ideals of equity, diversity and inclusion.

“Diversity is most important to me as team president,” he states. “There is a reason the team motto is ‘for all,’ because everyone that works for this team is in it together.”

One of the key components used in reaching this goal has been his dedication to seeking and developing minority talent for off the pitch as well as on it. Saba takes every effort to make sure he is giving every single person a fair opportunity. One of the ways this dedication has manifested is in his “open door policy,” where Saba has made it clear that team staff can take any concerns or suggestions right to him.

“Most players, because of our open door policy, are able to reach out to any leader on the team and ask for help – should they need it,” he says. “That is how we are currently able to provide other forms of employment for some of the players.”

Saba has experienced success in the pursuit of equity, one of his biggest achievements being the recent acquisition of head coach Sam Okpodu, a high-level talent that Saba was able to coax from his previous job – head coach of the Nigerian Women’s National Team.

In a country where a mere eight NBA and six NFL coaches are of color, Saba is working to improve that disparity in his own sport. Babjide Saba is someone driven by the possibility of a better tomorrow.

“Change is what inspires me,” he explains. “Sports business can be a toxic environment. I’d like to see it become more inclusive.”

Saba, and others like him, will be the ones to bring about the change they seek.