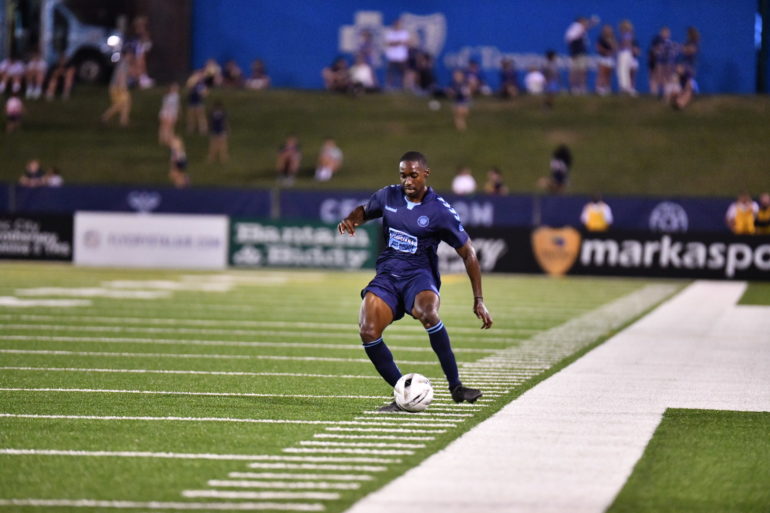 Shaun Russell didn’t realize the athlete he was becoming until he was 14 years old.

“I realized I was good when I got my first college letter,” he says.

It wasn’t much longer after that he got his first college call – a moment that cemented into his mind the fact that he just might be an above average soccer player. Even though Russell doesn’t remember the school that sent that letter (or the coach that made that call), he remembers the impact they made on him.

When one looks at Russell’s life, it’s no surprise he’s managed to make it to where he is.

“Both my parents have a military background,” he recalls. “We were living on base, and when I was four my parents signed me and my brother up for soccer.”

Who could have known such a simple action would be the catalyst for a lifelong passion – a passion that would ultimately lead to a career on the pitch.

Now, as a 28-year-old defensive starter for Chattanooga FC, Russell has more than 24 years’ experience in the sport he loves. Needless to say, he’s seen a lot in that time, and the road to where he is now hasn’t always been smoothly paved.

Russell is an athlete, a son, and a brother, but of the identities he’s defined by, he’s always been aware of one more than any other: African-American. While Russell is the first to admit that racism has not affected his career in any meaningful way, that doesn’t mean he’s never been in situations that made him acutely attuned to his worldly existence.

“I’ve seen [racism] around,” he says. “Even growing up [in Virginia] I was always the only black player, or one of only two black players.”

Rather than bring him down, these situations served only to strengthen Russell’s resolve to succeed. Today he’s a man discontent with the way things are in soccer, and he’s not afraid to speak up about it.

“In the sport of soccer, you don’t see a lot of black players or black coaches. That’s something that needs to change,” Russell says. “When you do see these black players, regardless of where they’re at, they’re still subjected to racism – on the field, from other players, and from fans.”

Since so many racial infractions take place on a noisy field, it’s often the case that the only witness was the target themself. Russell isn’t shy about pointing a finger at those in power who turn a blind eye to these incidents.

“In the US I’ve seen that teams are fined and players have been suspended, but racism is still taken lightly in the sport of soccer,” he says. “Very lightly.

“You see it around the world, you see it online, you see it on social media,” Russell continues. “I think FIFA does a very poor job of handling it.”

Even through all of the bad, Russell can see hope in certain organizations.

“I think NISA has done a really good job,” he says. “Just having [this conversation] shows that. I see NISA on social media talking about diversity, equity and inclusion, and that’s something that I just haven’t seen from other leagues.”

Russell hopes to create change from within by one day becoming a coach – a position where he can espouse the ideals of professionalism and equality that define him as a person. It’s a position he’s already comfortable in, seeing as he occasionally coaches young athletes when he’s home in Virginia.

Shaun Russell, and many like him, represents the tides of change being felt in every industry the world over. His experience will continue to inform his actions over words.