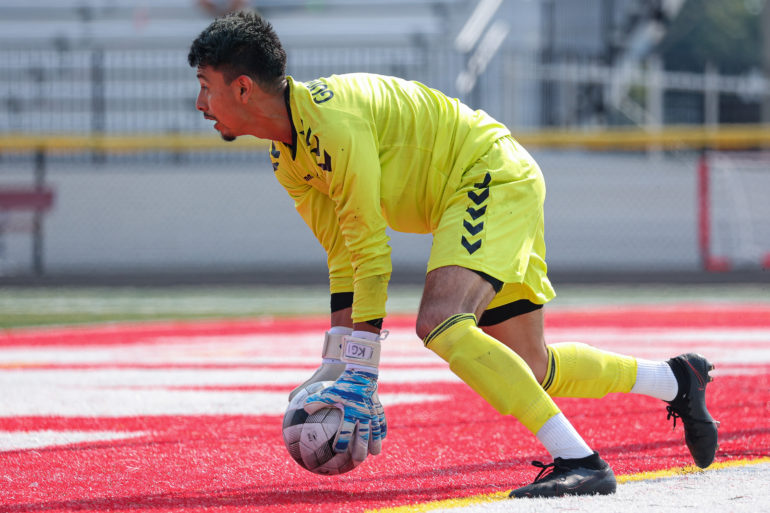 It takes a special type of person to be a goalkeeper. A goalkeeper isn’t just another element of a team’s defense – far from it, in fact. The goalkeeper is the final defensive measure a team has, tasked with possibly the most crucial job on the pitch.

Professional soccer players can send a ball towards the goal at speeds up to 80 miles per hour. It takes a unique individual to willingly get in front of it. Stumptown AC (now Chattanooga FC – 2022 Season) goalkeeper Kevin Gonzalez has had to contend with things much more harmful than a fast moving ball, and that’s part of why he’s the perfect man for the job.

Growing up in California, Gonzalez – known affectionately to those around him as KG – always felt the divide between him and the two cultures he was born into.

“I do view myself as American, I just know society doesn’t look at me as American,” he says. It wasn’t much different when visiting family in Mexico, a place that Gonzalez also knew he wasn’t seen as a member of the majority.

This feeling of alienation extended into all facets of his life, but it only acted as motivation to work even harder.

“I felt I had to do everything twice as hard,” Gonzalez says. “I had to be twice as good.”

Gonzalez picked up soccer at a very young age. His father played for Atlante FC in Mexico, before moving to America and playing for a local Bay Area team known as the Iguanas. This introduced both Gonzalez and his sister to the sport he would one day play at the professional level. Unfortunately, soccer was one of the places where he noticed the inequities of American life the most.

“Usually American goalkeepers are white, tall, aggressive,” Gonzalez explains. “That’s just not where my game is.”

This especially presented a problem when he was being scouted. Coaches were reluctant to put their faith in someone so far from the prototypical American goalkeeper — even as he was consistently proving his worth on the pitch.

“I noticed that Latinos sometimes get looked at in the game of soccer as undisciplined,” Gonzalez says. “Even at the professional level that can often happen.”

As if dealing with the adversity of cultural misconceptions weren’t enough, there were multiple occasions where Gonzalez had to deal with acts of racist hate directed at both him and his teammates.  Gonzalez recalls one particularly bad incident in his youth.

“We were playing in Modesto [California], and this one fan for the other team says, ‘be careful, this isn’t a sanctuary city,’” he recalls.

That incident was far from the only time Gonzalez or a teammate felt personally victimized.

“It was an uphill battle,” he says. “Every time we’d go to other communities, I felt it. I felt the negative energy towards us, the way I was frowned upon. That hurt. It hurt me, and it hurt a lot of my friends.”

While the challenges he faced as a Mexican American were painful, it was the economic  inequalities that were most blatant when it came to getting opportunities to succeed.

“Higher levels are pay to play,” he says. “And I realized cities like Palo Alto and Santa Clara had way more resources than mine.”

He recalls the feeling of beating almost every team, just to know their players would have more opportunities because they had more money. Gonzalez is also acutely aware of how this is still a big issue in the Bay Area.

“Clubs with bigger budgets, push clubs out of fields they’ve organically been a part of for 20 years,” he says. “Boys and girls need permits to even kick a ball on a field.”

Now, as a 28 year old professional soccer player, Gonzalez feels a sense of responsibility to promote diversity, equity and inclusion. He’s hoping to help create a world where no one has to feel like the odd man out. When pondering on what equality, diversity and inclusion mean to him, he said he thinks about his neighborhood.

“Sometimes you’re carrying the weight of your city, your whole community,” he says. “There’s times I feel I have to represent the city of Hayward and show kids that this is possible.”

Gonzalez has taken that attitude past words and into actions. Before turning pro he worked for the California government doing child development in lower income communities. He’s also worked as a coach for both the JV and varsity team at his high school, and he even offers low cost goalkeeper training for lower income players. These are things Gonzalez hopes to continue to do long after his playing days are over.

“I think about guys that are black, brown, even players in white communities that don’t get the opportunity to successfully play the game.”

Kevin Gonzalez is a man who has experienced the adversity that comes with being a minority, and has taken steps to change that. He isn’t just talking about it, he’s affecting real change in a real way.