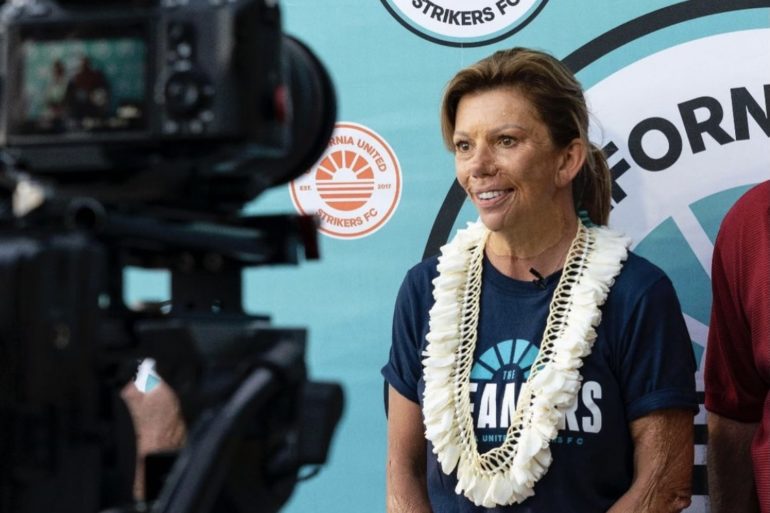 It’s hard to imagine the work that goes into running a professional sports team. It’s a tall task to be sure – one that could leave even the most die-hard of fans feeling that they bit off more than they could chew. Suffice it to say, running a sports team is not a job for the faint of heart, and few know that better than Bronwyn Capriotti.

Capriotti was never what you’d call a sports person. For most of her life you’d be much more likely to be reading a book than on a pitch.

“I was an English major,” she says. “I had no background in any kind of sports or anything. It was a lot.”

So how did she end up in the pilot seat of a professional soccer team? Well, Capriotti’s story is far from the norm. Her son, Duncan, has been a soccer fanatic since the age of seven.

“He really had a deep love for soccer,” she recalls. “He wanted to go pro. He was dead set on it.”

After playing NCAA soccer, Duncan eventually got to play for minor league teams in England. It was here that Capriotti learned just how limited options are for American soccer players. Time and again she witnessed as Duncan was passed up for promotion.

“Coaches would start him, and play him 90 minutes a night,” Capriotti says. “But he couldn’t get a contract, because they only signed local boys.”

It was with this knowledge that Capriotti, and her husband Pete, sought to create their own soccer team. Their goal was to do for the young soccer talent of Southern California the same thing that those lower level teams did for young English talent – provide a space to grow and improve as a player; levels of competitive play between college and the MLS.

The Capriottis started their soccer careers with a team in the ill-fated North American Soccer League (NASL). This team, the LA Wolves, was the beginning of everything for them. It was where they first cut their teeth and learned just how much they didn’t know.

In 2017 the NASL folded, and Capriotti was left unsure of the future of their club. That is, until she came across NISA and they managed to find a new home for their team under the name California United Strikers FC. They even managed to bring twelve former LA Wolves with them to NISA – including Duncan.

“I came in as the boss, which is a much different journey than working my way up through the ranks,” she says. “At the end of the day, I’m the one signing the checks, so everyone is pretty nice to me.”

Capriotti has fully embraced the spirit that her team was founded in – that of serving their community. Besides the team being in large part local players, the Cal United staff has begun organizing community outreach events of all kinds. In addition to the standard fare like helping out at food banks, they’ve taken things a step further.

“We’ve just started forming alliances with schools, the first of which is Sycamore Elementary in Santa Ana,” she explains. “We send players to help out with PE classes and even in certain reading programs.”

This dedication to the community even extends as far as the stadium. Capriotti is a strong believer that everyone in their community should be able to experience a soccer game –  not just those with means.

“It’s wildly important to me that we put on an event that even families without a lot of disposable income can go to and not break the bank,” she says.

As long as people like Capriotti continue to work towards a brighter future, the sports world will surely change. She, and others like her, will always push for a world where everyone is welcome and valued for what they’re capable of – not what they are.