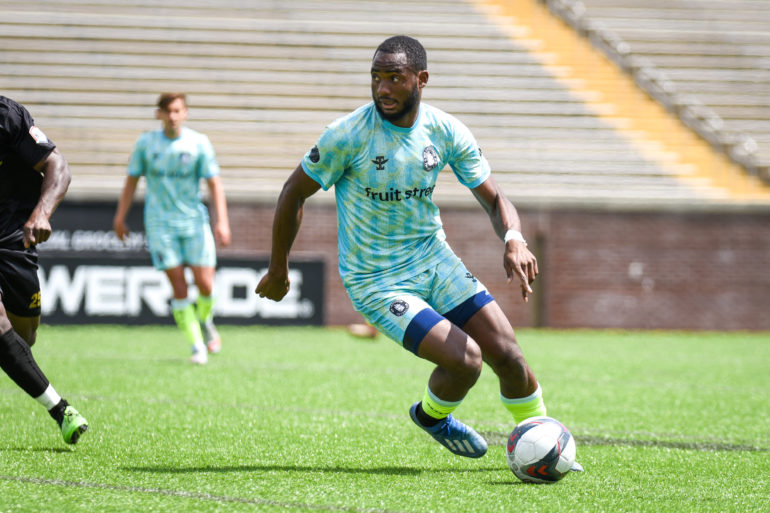 Duke history professor Laurent Dubois stated, in his book The Language of the Game: How to Understand Soccer, that soccer is “…a language, probably the most universal on the planet.” This is a fact well known to New Amsterdam FC starting wing Mayele Malango. His journey has taken him thousands of miles – from the rainforests of equatorial Africa, all the way to the east coast of America. However, he’s never felt isolated thanks to a shared language everywhere he went.

When Malango was three years old, civil war broke out in his birth nation of the Democratic Republic of Congo. This war forced Malango and his family to flee the nation they knew so well, only finding peace when they were able to settle in a Malawi refugee camp – a nation more than 1000 miles away.

They were strangers in a strange land; victims of circumstance determined to make the best of their situation. Malango and his family lived in Malawi for 10 years. It was an experience that deeply impacted him, and redefined his understanding of identity.

“I am from DRC [Democratic Republic of Congo], and I am from Malawi,” says Malango. “I am both.”

The war instilled in Malango the fact that identity is about much more than just skin color or borders. This wasn’t a war fought along lines of color or race, but instead along cultural lines – divisions invisible to the untrained eye.

Malango faced a great deal of adversity during his time in Malawi. As a foreigner and a refugee, food and shelter were never guaranteed. There was one thing, however, that gave him the ability to truly connect with those around him; one thing that truly gave him an escape from his life – soccer.

“In Africa, when I was growing up, the only sport we had was soccer,” he says. “That’s pretty much all you do. There is no basketball, there is no football, just soccer.”

Groups of children would crowd the gravel roads around the refugee camp, all playing soccer barefoot. It was in these masses that Malango spent his days, honing his skill amongst peers. Malango quickly learned that he had a natural talent for the sport.

As Malango became more fluent in this language, it revealed more of the world to him. He was able to become friends with local boys his age, and even became a well known face in the community for his skills on the pitch.

In 2015, Malango and his family moved to Lowell, Mass., a suburb of Boston, through the United Nations Refugee Program. By this time Malango was a junior in high school (at Lowell High School) and had grown to become quite the formidable soccer player. In this strange new place, he found that soccer would once again become his bridge to those around him.

“My teammates helped me so much those years,” Malango recalls. “I didn’t speak much English, and they would help me translate.”

His teammates helped him grow accustomed to American culture in almost every way. He recalls the first time he wore soccer cleats, how uncomfortable he felt after a lifetime of playing barefoot – and how his teammates helped him adjust to the new gear. He would go on to lead his conference in scoring, lead his team to a division championship, and win league MVP…and then he’d do that all again his senior year.

Malango is now a 24-year-old man. His life’s journey has taught him about the true nature of both himself and the world around him. It’s been a journey forced upon him by circumstance, but one he’s made the most of. Above all, Malango has learned no matter where he goes there will always be someone who will speak his language.