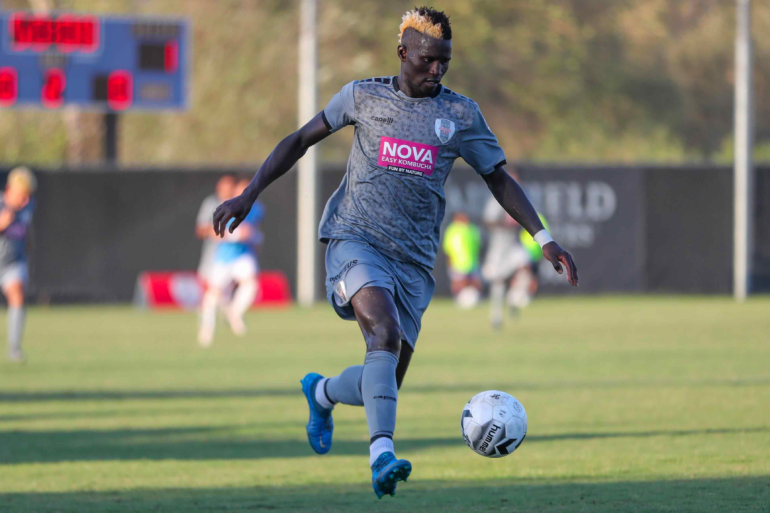 6229 miles is a long way to travel to pursue a dream. But the distance from the west coast of Africa to sunny San Diego, Calif., is all part of the journey that began for Alioune Diakhate when he was a little boy. Sometime between the ages of five and seven years of age, Diakhate, who was born and raised in Dakar, the capital of the Republic of Senegal, discovered soccer, and from that point forward, his journey was one of destiny.

The ALBION San Diego attacking center forward grew up in Camp Sekou Mballo, a neighborhood reserved for policemen and their families. Diakhate’s father was a 32-year veteran of the local police department. Diakhate recalls watching his four brothers (he also has three sisters) effortlessly juggle the ball with their feet. He would go and watch his friends play soccer, but he wasn’t enrolled on the team and was forced to stand on the sidelines as a spectator.

“Finally,” he recalled, “after going every time with my friends to watch their practice, one day the coach let me in and allowed me to play. Since that day, I was part of the soccer school. It’s that way that I discovered the game.”

Diakhate’s family was surprised that he had been admitted into the soccer school and excited. His parents and his siblings recognized his passion for the game.

“One of my brothers always believed in me,” he reflected. “He bought soccer cleats for me— Adidas Predators that were black and red. He went everywhere with me.”

Diakhate’s brother brought his sibling to practices and to tryouts with other local leagues.

“I got support from my other brothers and sisters, too,” he said, “who brought me to games and brought food. My Mom, when I had a game, could not sleep until I returned home. I thank God for my family and friends. Without them, I would not be where I am today.”

From that moment, he was completely drawn to the sport. As he approached his teen years, Diakhate became even more serious about his commitment to the game. He played in large tournaments, as well as in Nevetane —the summer vacation league. He enrolled in different soccer academies in Senegal—Academy Mawade Wade and Academy Foot Pro. He also traveled and played in Partizan Belgrade in Serbia, as well as in Ukraine and Russia.

“At that moment, I decided that I wanted to be a professional soccer player,” he says, “to have that career, and to secure my future. It was a big dream, and I am happy that that dream is accomplished.”

The 2022 season has been an exciting one, so far, for the 28-year-old. He has been on fire, scoring 11 goals (presently the second highest scorer in the league), along with racking up 4 assists in 14 games.

But it’s a long way top, as the old AC/DC tune goes. Soccer success was not instantaneous for Diakhate.

“I did not have the perfect soccer cleats,” he says about his early years, “but everything was working for me on the field. It was hard to get good opportunities, but I always played for fun and learned. Everyone in my family, my uncles, and my friends were helping me by pushing me to be able to get the best opportunities.”

As he progressed, and opportunities abroad presented themselves, Diakhate faced yet more headwinds. He had difficulty getting travel visas and was made promises by teams that were not kept. Still, none of this deterred the dream.

In February 2018, networking hard, Diakhate made the move to the United States to join the National Premiere Soccer League, playing for the Aguiluchos in Oakland for two months before signing with Indy Eleven in 2019.

“I’ve been working hard, keeping it going, and trying to be locked in and focused on everything,” he says, determined. “I have the belief and I know what I want. I work hard, take notice, and communicate. I take care of my body, I avoid injuries, and I try to be consistent every day. I am very confident, looking forward to playing the best I can, to help my team be successful.”

And while he is 6229 miles from home, he has adjusted nicely to living in the U.S.

“In this country, I have discovered so many good things: pancakes, s’mores, fancy beach chairs, good barbecue, picnic cookouts. . .I love it here.”

For Alioune Diakhate, the dream that began on the soccer fields of his youth in Senegal is alive and well in NISA.

And what advice does he have for a young girl or boy a world away who dreams of playing professional soccer?

“Reach for opportunities and take advantage of what you need to work more, to get better every day,” he instructs. “Have the belief to work hard, and success will be next.”